The rapid proliferation of fiat-backed currency has created — in a narrow timeframe comprising of only a few years — a sharp upswing in the U.S. economy. Artificial liquidity enabled speculators to hugely profit from supply demand dynamics in equity markets, real estate, and commodities. Seemingly overnight, traders and investors made a fortune. But when the crash came, the suddenly wealthy became the suddenly poor.

Although the above circumstances may very well describe the events leading up to the 2008 global financial crisis — and even the volatility of the Great Recession era of which we are still in — the panic of 1819 was truly the time when Americans first became culturally acquainted with the whimsically callous nature of boom bust cycles. In fact, much of the modern terminology used to explain economic conditions resulted from this era.

At the time, banks were comparatively decentralized, with individual institutions allowed to issue their own unique banknotes. In theory, banknotes could be exchanged for their value in hard money — gold and silver. However, several banks inflated the currency supply to fuel economic activity and the aforementioned speculation. When the markets collapsed, banks immediately called in their notes, which stopped high-flying debtors cold in their tracks.

Although history has shown the consequences of inflationary policies, it also demonstrates — like in the crash of 1929 — that reactionary policies exacerbate the imbalance caused by an initial shock to the monetary system. In 1819, the calling in of banknotes resulted in a constricting of the money supply, directly sparking deflation.

Similar overtures can be experienced right now. The rapid proliferation of the dollar infused by accommodative policies by the U.S. Federal Reserve has catalyzed an unprecedented bull run in blue-chip stocks. The three major indices — Dow Jones, S&P 500, Nasdaq Composite — have all jumped to all-time nominal highs. The presidential administration swears that economic recovery is upon us and the mainstream media has cheered the accomplishments of our dear leader.

Yet for all the hoopla, the S&P 500 has clearly shown signs of tiredness. Against a monthly-average basis, the velocity of the index has crawled to an annualized rate of less than 9%. Consider that in the prior year, the rate was 15.5% and in 2013, 23.4%. 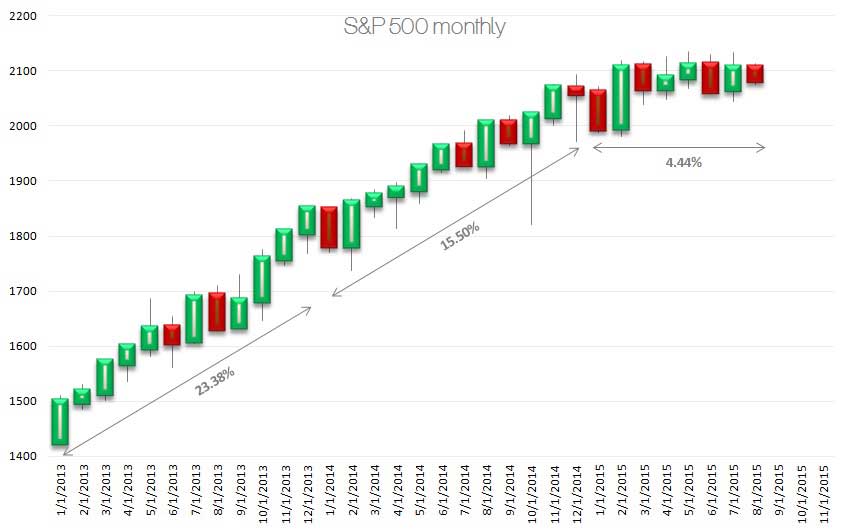 Making matters worse is news that the Fed is all but set to raise short-term interest rates in September. That can only mean one thing — a contraction of the money supply. From there, the deflation that the economy is experiencing in critical sectors will likely worsen, both positively and negatively impacting fixed-income workers. The net result, though, is bearish — negative factors such as equity valuation losses and labor market cuts will likely outpace the benefits of deflated consumer prices.

History may not always repeat exactly, but we ignore the warnings of 1819 at our peril.