With one of the more pointed article titles regarding the U.S. equities market, Business Insider notes that “The S&P 500 is up an impressive 0% this year.” In actuality, the benchmark index is up 0.79% year-to-date, but the more important message is that in a tumultuous second-half of 2015, the fact that Wall Street could charge right back on its feet is certainly a noteworthy achievement. Whether it lasts or not is an entirely different story.

Before throwing shade at the optimism of the bulls, let’s review the numbers. For the month of October — traditionally considered one of the more vulnerable periods to suffer sharp volatility — the S&P 500 is up nearly 8%, and almost reversing the entire loss suffered during the broad market correction in August. With last Friday’s session, the index is officially priced above both its 50 and 200 day moving averages, and managed to be in the black on a YTD basis.

Fundamentally, as Business Insider points out, Wall Street overcame a number of obstacles. First, there was severe weakness in the emerging markets precipitated by China’s remarkable collapse in mid-June of this year. Second, many emerging market currencies — including the Chinese yuan — were devalued, which in turn increased the relative value of the dollar. But most importantly, the September jobs report released by the U.S. Department of Labor was a total flop — and brought with it negative revisions for July and August.

But who needs fundamentals or a sound economy when investing in American blue-chips? A cursory look at a point-and-figure chart of the S&P 500 — a less common methodology of technical analysis which strictly plots price change magnitude as a forecasting guide — gives us all that we need to know.

In a P&F chart, X values denote a positive change in price action that meets or exceeds an arbitrary (pre-defined) threshold. O values, on the other hand, are negative changes in magnitude. Time value is completely ignored in this type of analysis, but can be extracted by pulling up a standard technical chart. 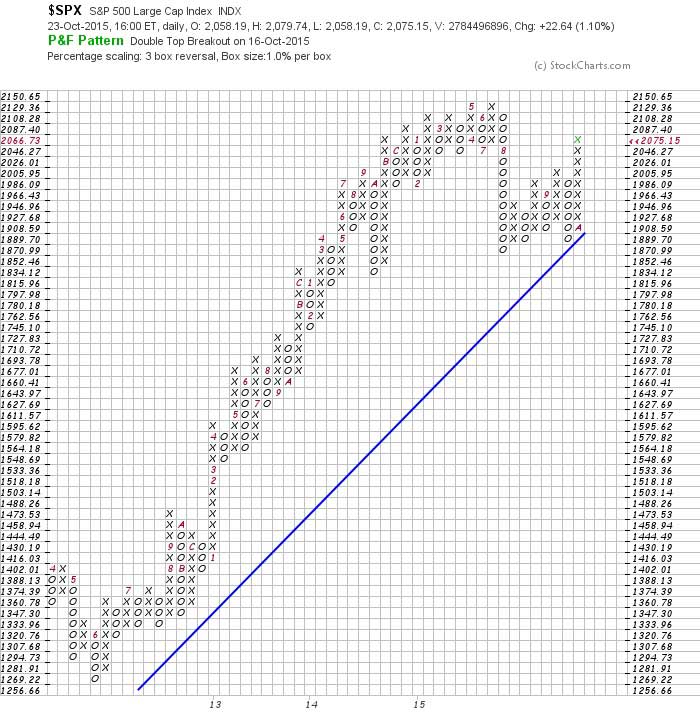 As one can see, the latest column of price action changes features a rather lengthy series of Xs — 8 of them, in fact, which also marks the biggest rally of this year. One would have to go back to the rally of October of 2014 (denoted by the 11 Xs towards the middle of the P&F chart) to find a rally of similar performance.

This may be all and well for Wall Street investors but buying too deeply into the current rally overlooks the enormous presence of bearish traders. For example, there were six Os just prior to the recent run up. More tellingly, the August correction featured a series of 12 Os — a bearish magnitude that was 50% higher than what the bulls had to offer so far. And although the P&F chart ignores time, it has to be said that the drop was far quicker than the rally.

It’s not so much that the bulls are wrong — so far, they have proven the detractors wrong. However, the bears won’t simply go away because of a month-long reversal. Although bullishly slanted right now, the P&F chart demonstrates that from a topical perspective of the S&P 500, supply outpaces demand — and that usually doesn’t end up favorably for the buy-side of the trade.