The S&P 500 is Slowly Creeping Towards Irrelevancy

It’s been a remarkably news-rich cycle this past week. First and foremost, we had the first presidential debate between Republican Donald Trump and Democrat Hillary Clinton. Later on, we heard that OPEC has agreed to an oil production cut. Last Friday, the White House approved sales of currently-deployed fighter jets to three Persian Gulf nations. But amid all these powerful drivers, the stock markets have yet again disappointed. What exactly is going on here?

Let’s take a look at the benchmark S&P 500. For the week beginning September 26, the index gained less than two-tenths of a percent. Bluntly, that is pathetic. Worryingly, the prior week’s performance wasn’t all that much better. It then makes one wonder how in the world the S&P is still up 6% for the year. 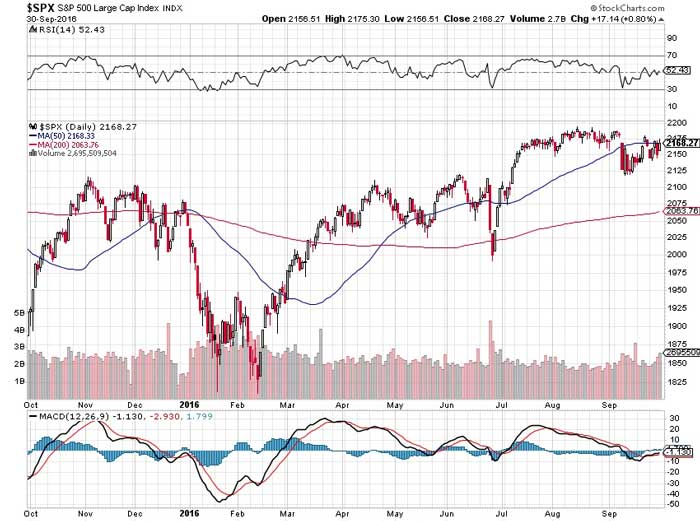 I’ve been arguing for some time that momentum is drying up in the blue-chip markets. While exact predictions are difficult to pinpoint, I’d say that momentum has just shifted from dying to dead. It’s just a matter of time before the much-awaited correction occurs.

I point to the rising pennant formation in the S&P 500 between September 9 and September 30 as evidence. During these three weeks, the index cratered, then crawled its way to its current position. During the upward journey, a few pokes at resistance were leveled. But for the most part, upside trades have been limited to 2,170 points.

The result is a pennant-looking shape that has bearish implications. Ultimately, the pattern communicates weakness. The bulls are attempting to break upside resistance, but cannot. The support from fundamental news items — mainly, that interest rates will likely stay low because the economy is crap — hasn’t been of utility. And if that isn’t enough to juice up the markets, it’s doubtful that anything else would do.

It’s clear that most investors are struggling with a dilemma. While valuations have sharply risen from March until now, the volume level has stayed relatively flat. That’s an oddity that shouldn’t go ignored. Apparently, the stock market reached record highs but with fewer people than ever before. If there ever was a recipe for a house of cards, the S&P 500 might be it.

At this point, the hesitation is the insanity of the financial system. Markets can stay illogical longer than you can stay solvent. My thesis, however, is that the suspension of logic has a limited time span. The longer the markets stay afloat, the more fearful I am of holding the bag.

Maybe that’s just me. Maybe I’m being overly pessimistic. But would you want to take that chance?