S&P 500 Has Worst Opening Week In Its History

Many openly taunted bearish market forecasters as prognosticators of doom and gloom, yet today, few on Wall Street would find much humor in those earlier insults. A slew of negative economic data — particularly from emerging market leader China — set in motion a global correction that has taken mainstream analysts by surprise. Unwilling to give full credence to the truth, Reuters, in its recent market wrap-up, “After dreadful week, stocks look for reason to bounce,” failed to disclose the ultimate painful reality — last week was the worst opening week in the history of the S&P 500.

That’s right. You can go back all the way to the 1950s and you will not find an opening week performance worse than -5.7%. There have been some close calls — 1974, 1998, and 2009 come quickly to mind — but 2016 grabs the dubious honor, and will likely hold it for some time. In 2009, for example, the S&P 500 lost -4.2% in its opening week, this in the wake of the worst financial crisis in modern history. Suffice to say, it would take some sort of inverse-miracle to break the new year’s freshly christened record.

Then again, we are entering into a brave new world in the markets. Twice last week, circuit breakers that would initiate based on selloffs reaching -5% were activated by securities officials in China. Despite this “corrective” action, the Shanghai Stock Exchange Composite Index still lost -10% against its January 4 opener. The global financial community blasted the Chinese for meddling in the free markets — claiming that it only worsened the volatility — and in rare moment of capitulation, China’s government agreed, stepping away from the overt manipulation. 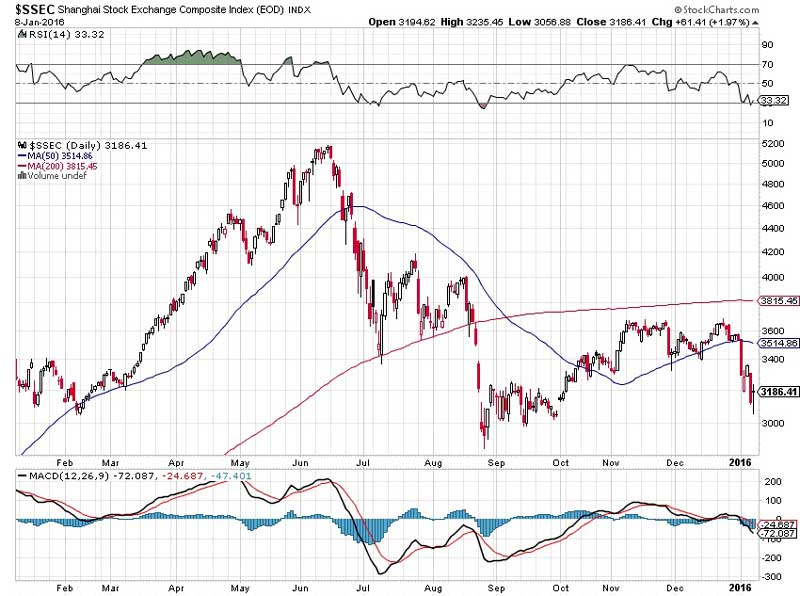 That’s a small comfort but it won’t last long. Manufacturing data is still weaker than expected in the Asian powerhouse, and data from The World Bank demonstrates a significant deceleration in Chinese gross domestic product growth. Indeed, most, if not all, Chinese stocks traded in the American Depositary Receipt experienced tremendous volatility last week and are positioned precariously from a technical analysis point-of-view.

The markets will need a fundamental reason to rise, but simply put, there doesn’t appear to be any on the horizon. Earnings results for the fourth quarter of 2015 will start pouring in over the next two months and many sectors are heavily embattled. Broad financial performance could dip below the negative revisions of Wall Street, which would make already bad news even worse.

And then there’s the problem of the emerging markets. China, as mentioned before, is not providing the growth that investors have come to expect during the 2000s decade. Other developing nations’ economies are highly dependent upon commodity exports — and we all know what a cluster bomb commodities have been during the past two years.

We haven’t even settled into 2016 and already, it has bitten us in the neck.