With the U.S. stock market pulling together a string of strong performances for the week beginning January 19th, several sources within the mainstream media conglomerates are convinced that equities represent the best safe-haven vehicle in a geopolitical context that has witnessed an increasing share of turmoil and ambiguity. Gold bullion, which historically acted as a hedge against uncertainty or anticipated volatility, remains a subject of derision in popular business media. “…Gold doesn’t produce any future wealth, which makes it hard to say what a fair value for it would be,” writes Ian Salisbury for Money, a subsidiary of Time Magazine. ”

Its jumps in price generally reflect changes in politics and market psychology, which are hard to predict. In the long run, gold isn’t likely to do more than keep up with inflation. Add in trading and investment management costs and most long-term investors are better off just riding out the market’s ups and downs” (Salisbury, Ian. “Gold is Back—for Now“. Money. January 23, 2015. Web.). As is common with many general articles on financial investments, Mr. Salisbury fails to provide substantive evidence to support his forecast of gold’s poor performance, but he does affirm one of its price catalysts: market psychology. Ironically, what Mr. Salisbury views as a vulnerability for gold investment is actually a concession to the countering perspective.

The idea that market sentiment is difficult to predict is an old argument that finds several backers. It is often used to decry the very concept of forecasting and the statistical sciences, with the proposal that such methodologies do not produce wholly accurate and replicable results, and are thus unworthy of the term “science.” Sadly, this biased understanding of the forecasting discipline ignores the demand of probability models across diverse industries. Grocery chains, coffee shops, government agencies, and of course the local weather report all apply forecasting analyses to help make better or potentially more profitable decisions. Why then would the financial markets be any different?

An important point to note is that chief players in the equities sector, such as hedge funds or mutual funds, routinely place bets on the anticipated trajectory of broad-based indices through positions taken in the derivatives or options market. The sharp swings in this ancillary sector filters its way into the major indices like the Dow Jones or the S&P 500. In fact, the popular VIX index, known colloquially as the “fear index,” is a complex algorithm that incorporates daily price performances of put and call options on the S&P 500. However, because the VIX is a performance-based oscillator, it is not an investable asset. For a greater understanding of market sentiment, it is useful to analyze funds based on the VIX’s gyrations.

Sharp Price Recovery In The S&P 500

The VelocityShares Daily Inverse VIX (NYSE : XIV) is a fund that attempts to inversely correlate with the implications of the VIX “fear index.” Stated differently, the Inverse VIX in theory should correlate directly with the S&P 500: as the S&P goes, so goes the Inverse VIX. Mathematically speaking, the long-term correlation between the two indicators is 95-percent, an extremely strong statistical relationship. However, the other five percent is of significant interest since it clues us into the variance of this otherwise exceptional relationship. Since the beginning of the new year, the average correlation has fallen to 83-percent despite a sharp price recovery in the S&P 500. 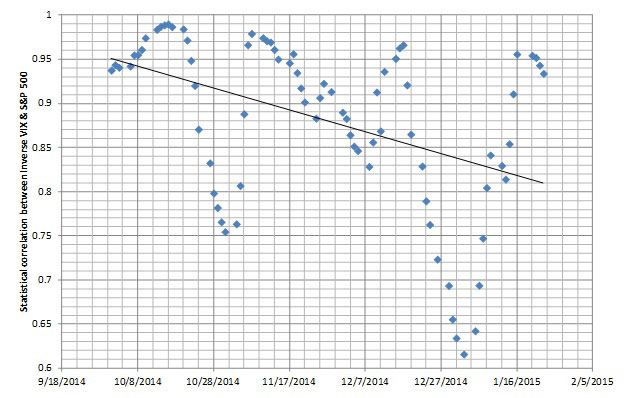 Using technical analysis parlance, the correlation is charting a series of lower highs and lower lows, suggestive of a future downturn. Based on the fact that the correlation appears to have peaked last week, another negative shift occurring within the statistical relationship is likely. This is all the more troublesome since the Inverse-VIX is waning ahead of the S&P index. In theory, this is a sign that bearish put options are held in higher frequency and density while bullish call options are held at high but isolated positions, lacking the support of numbers. The prudent money in this case is hedging against market volatility, leaving speculators stranded with their lofty calls. This variance within the totality of market sentiment is almost surely the root cause of the split between the Inverse-VIX and the S&P 500 (the other five-percent), the implication of which will likely filter into broader trading activity.