Not Everything in the Stock Market is Bad

With a slight 0.2% loss on Friday, the benchmark S&P 500 index capped off another week of flat returns. In fact, over the trailing 30 days, the index is down exactly one-hundredth of a percent. That’s the kind of news that no trader — whether bullish or bearish — wants to hear. This sounds like a harbinger of an incoming crash. Perhaps the markets have been running too hot for too long.

It’s not difficult to see the evidence of this forecast. Brick-and-mortar retailers have almost universally suffered from declining foot traffic. It doesn’t matter if the consumer intended to buy a pair of cheap sunglasses or plunking down thousands for a Cartier watch. No retailer can afford to ignore declining consumer confidence, and the broader trend to shop online.

That spills over into the commodity markets as well. Gasoline prices have fallen from historical averages as there’s simply less people on the road. That may be good for the average driver. But from a macroeconomic perspective, oil has become a deflated asset. That in turn impacts major oil companies — the same companies to where millions of Americans’ retirement portfolios are attached. 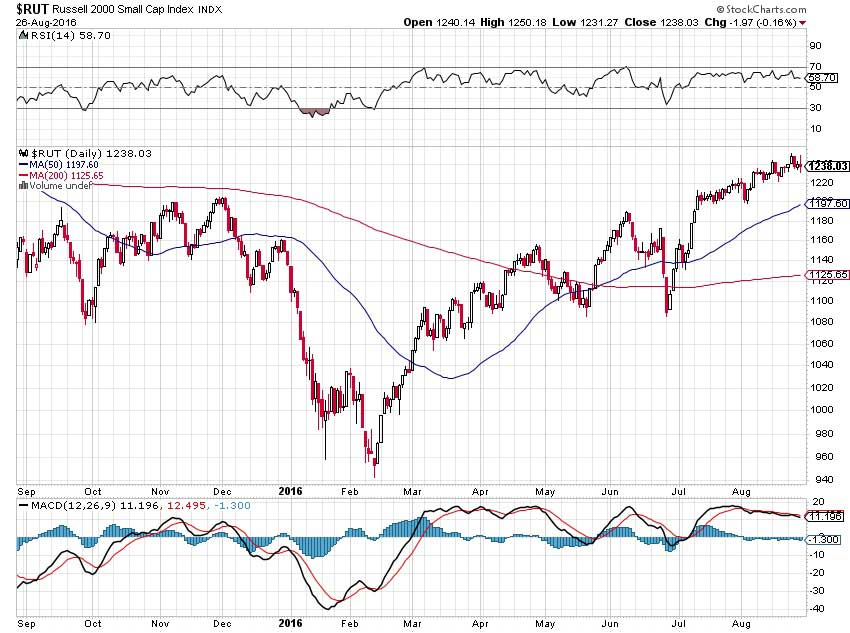 On the technical front, the S&P jumped sharply since hitting bottom in late June. However, the rally has become somewhat parabolic, or bowl-shaped. Valuations jumped, then peaked, and now appear to be curling downwards. On the other hand, the Russell Small Cap has been charting a prominently bullish trend channel since the beginning of March.

I think it’s pretty clear that the era of growth for old, stodgy companies are on the decline. Innovators, like Tesla Motors Inc. (NASDAQ:TSLA), are gaining new ground and will likely lay the foundation for 21st century business. In that regard, it shouldn’t be a surprise that lesser capitalized organizations have the agility that the established firms do not.

Of course, the cautionary note is this — the small cap run-up isn’t a ringing endorsement. Generally speaking, the U.S. and most western markets face severe challenges. That won’t be easy to overcome by any stretch of the imagination.

What I am saying is that smaller firms are more flexible in how they run their business and how they tackle variables. Under the right leadership, small cap companies can advantage opportunities quickly while their larger brethren lag behind.