Supermarkets May Be In Trouble — And It’s Not What You Think!

As the markets slowly chip away at upside resistance — the benchmark S&P 500 is still a percent off its break-even point for the year — it’s getting pretty clear that most sectors are probably not going to be profitable by the end of 2016. One such industry is the supermarket, particularly the giant conglomerates. After riding a strong wave of momentum in the years following the onset of the Great Recession, several grocery companies have stalled recently.

The reasons may seem pretty obvious. As falling national gas prices can attest, our country and several of our international partners are suffering from deflation. Other commodities and resources like gold (prior to the recent rally) have also been tripped up, further indicating deflationary pressures. And under such circumstances, lower prices tend to be both a blessing and a curse.

Yes, the newfound discount may be boon for the spendthrift — but how many Americans does that describe? More often than not, people are living paycheck to paycheck. That’s quite problematic, considering that multiple labor market reports suggest that wage growth is hardly keeping pace with expectations. So prices may be falling, but employers are less willing to pay their workers with increasingly more valuable dollars.

That certainly spells trouble for supermarket chains like The Kroger Co. (NYSE:KR). Supermarkets are low-margin businesses that live and die on volume. If wage growth is underperforming, that could eat away at the consistent volume that Kroger needs to survive, especially with the number of acquisitions the grocery giant has made in the past few years. 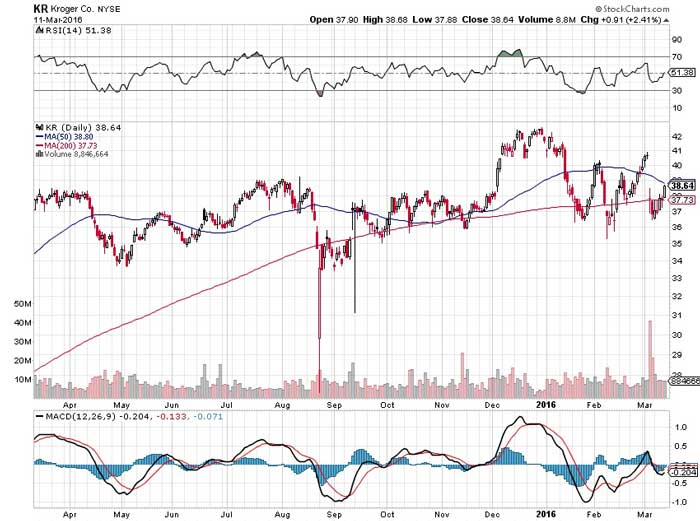 The real catalyst of pain for KR stock, however, is cannibalization. Other retail behemoths like Wal-Mart Stores, Inc. (NYSE:WMT) and Target Corp. (NYSE:TGT) have been encroaching on Kroger’s — and other grocery stores’ — turf, and it’s starting to look more and more like a battle royale.

Both Wal-Mart and Target feature in-store brands and premium labels that cater to the tastes and wallets of diverse customers. The big-box retailers also have the advantage of a one-stop-shop setup. Where else can you grab a jar of mayo, a high-end digital SLR camera, and quarts of synthetic oil — simply because you can?

To be fair, Kroger and its ilk are not taking this lying down. In order to win back customers who are being lured away into Wal-Mart or Target stores, traditional supermarkets are doubling down on coupons and other discount offers. The challenge here, of course, is that it cuts into margins — something that is already tight to begin with.

For its part, the markets simply are not convinced by Kroger. KR stock has been bouncing up and down a sideways consolidation channel, and there doesn’t seem to be much in the way of a definitive trajectory. Given the fundamental pressures that Kroger is facing, the technical patterns should be regarded more as a warning than as a buying opportunity.