How Many Tricks Does Wall Street Have Up Its Sleeve?

On the front of it, the financial markets have had a fairly good showing. The benchmark S&P 500 slipped slightly on Friday, but managed to net gains for the week. That put the SPDR S&P 500 (NYSEARCA:SPY) — the exchange-traded fund that tracks the index — ahead for the week by 1.6%. The SPY is also positive for the year by nearly 2%. Although these are numbers that aren’t going to make investors rich, the performance does come at a time when Wall Street is particularly antsy about weak second quarter earnings.

According to several insiders and analysts, the current earnings season — which kicked off with Alcoa Inc. (AA) reporting results on April 11 — is widely expected to under-deliver. So far, it’s been more bark than bite. Of the companies that have reported their financials so far this season, only eight have failed to meet forecast. However, the earnings season is still very young, with major companies yet to report. Also, the revenue performance against the year-ago quarter was substandard.

The 30 companies that have reported recorded a year-over-year revenue gain of only half a percent. Thanks to some pretty bad misses — led by Titan Machinery Inc. (NASD:TITN) revenue drop of 31% — the overall picture for the markets is bleak. Yes, the markets have priced in the bearishness to some extent — the aggregate sales losses were expected early on — but the news may get worse as we get into the meat of earnings season.

The main question here is, “where’s the growth?” It’s one thing for a sector or two to underperform. It’s quite another non-goods producing organizations like insurance companies are among the broad market leaders in sales. The SPY, as a collective fund, doesn’t really provide much in the way of confidence. 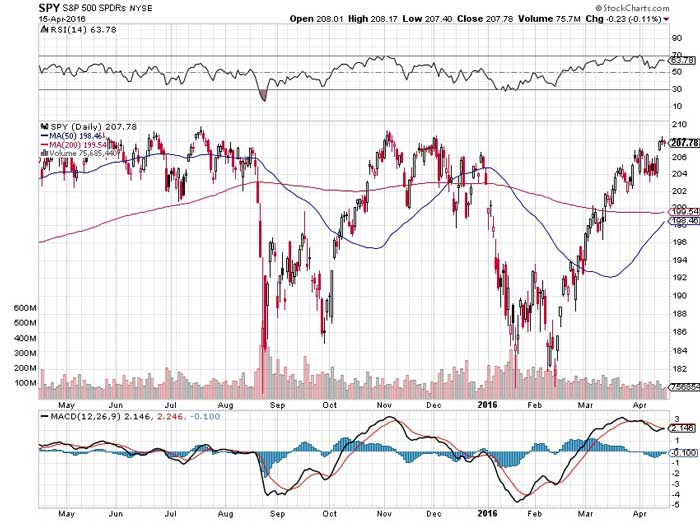 Sure, the SPY has beaten expectations since hitting bottom in mid-February, jumping more than 14%. At the same time, the technical velocity has significantly slowed in recent trades. For example, the SPY gained only 4.2% for the month of March. So far this month, the SPY has only gained 0.4%. On a forward basis for April, that would equate to less than a percent.

Another technical indicator to key in on is volume. While the SPY made the bulk of its “recovery gains,” the total volume has generally declined. This dichotomy between rising price and declining volume is typically regarded as a warning sign for most technical analysts. Even if you dismiss the idea of technical analysis, the lack of growth in trading volume as the markets move higher is empirically an indication of weak commitment — traders see the appreciation in market value, yet they don’t want to commit to it (ie. they don’t want to risk their money).

Why not? I thought — like every other football-watching, donut-eating American — that the economy was great. Things are getting better! Collectivization works! In reality, that’s simply not the case. While the mainstream media can parade around their political talking points, the fact is this — Wall Street is not buying it. Maybe they’ll buy it tomorrow. But today, they aren’t buying it. If they did, the SPY would be much higher than it currently is.

You can take that to the bank.