Will The Trump Rally Ever End?

As a technical analyst that is featured on multiple mainstream channels — including Yahoo Finance and MSN Money — I do my absolute best to keep track of the idiosyncrasies of the financial markets. Usually, there’s a predictability to the ebb-and-flow; hence, the plethora of commonly acknowledged chart patterns like “head-and-shoulders” or “bullish wedge.” Essentially, price dynamics reflect the psychological maneuvering of traders. But I have to admit that the Donald Trump-inspired market rally has got me bamboozled.

This shouldn’t be too surprising. This is, after all, a man that completely overturned the political albatross and a media empire designed to cover it. When pundit after pundit, expert after nauseating expert pronounced the death knell of the Republican presidential campaign, perhaps only Trump knew that the final outcome would be so very different. This wasn’t just a White House victory — this was a master class of ingeniously subversive tactics that upended the status quo.

A year or two into the second term of the Obama administration, it was a bygone conclusion that Hillary Clinton was heir apparent. Elitist Democrats had pegged her to lead a historic campaign in 2008, only to have found someone better — and a surer bet — in the current lame-duck President. Naturally, the Democrats wanted to do the historic two-peat: first black President, followed by the first lady President. Certainly, society at large has drunk copiously from the cup of progressivism. There’s no way that an old white man would stand a chance.

Unless of course that old white man is Donald Trump. Then all the rules that used to apply no longer do. That was the case in the race for the White House. The former “Apprentice” reality-TV star will now be the 45th President of the United States. After all this, why should we expect the old rules to apply in the markets? 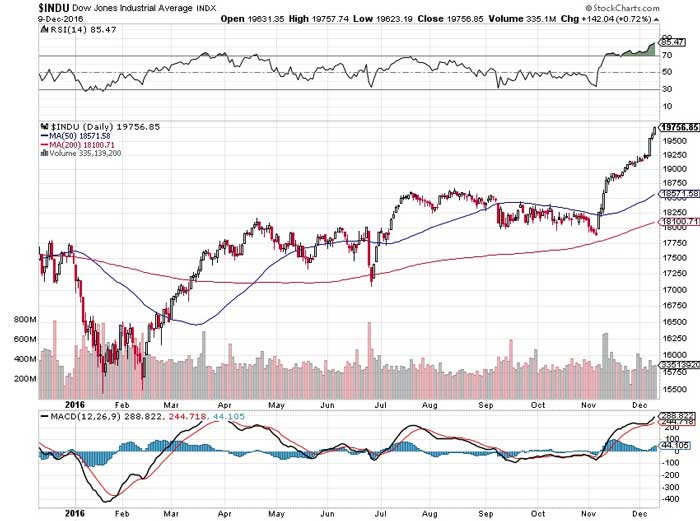 Trump is immensely proud of the market rally — why not? He’s taken credit for everything else, so this just adds to his remarkable coronation party. He believes the Dow Jones will go to the moon. After such a thorough butt-kicking everywhere else, I doubt there’s too many people who will challenge his thesis.

But it’s in exactly these times where caution is warranted. Yes, the Dow has made in many ways an unprecedented swing upward. But is that due to the underlying fundamentals of the economy, or is it a relief rally — a relief that maybe the idea of President Trump isn’t so bad after all. If so, I’m not too big of a fan on the “merits” of low expectations.

In order for the markets to keep its gains, it needs substantive evidence that the lofty valuations are justified. From what I see, many companies are barely struggling to stay afloat — and in too many cases, the end has been reached. This is really an economy of consolidation. Its trudging along, but only because of cost-cutting and other deleterious measures.

At some point, we’re going to need to see real growth. But waiting around for something that may not happen, and at all-time record highs, isn’t exactly my idea of a risk-free investment.