After showing recent promise, all major U.S. blue-chip indices ended the final trading day of 2015 in the red — quite an appropriate ending for what has been regarded as a tumultuous year for stocks, according to The Wall Street Journal. Ironically, the losses for the day were led by the Nasdaq Composite Index, which was the only stock index that actually was in the black for the year, trading a singular -1.15% decline for an overall 4.2% annual return.

The same could not be said for the benchmark S&P 500 index, which ended 2015 down -2%, accentuated by a -1% loss on December 31. The tried-and-true Dow Jones Industrial Average was the worst of the bunch, falling nearly -3.5% for the year as even some of the heartiest names among publicly traded companies fell victim to poor financial performances against largely soft expectations.

The biggest story inarguably was the commodities sector, namely crude oil. While other physical commodities like gold, silver, and other industrial precious metals experienced volatility, it appears that most of the technical damage was already inflicted in years 2013 and 2014. For example, the biggest spread in volatility in gold bullion in 2015 was roughly 19%. The equivalent spread in silver bullion was 25%.

For oil, though, the sinking in valuation is still an ongoing affair. Just in the month of December, the international benchmark Brent Crude Oil lost -16% in the commodity markets. The light crude index West Texas Intermediate pared losses somewhat, but still absorbed a decline of -11% last month. Unusually warm weather contributed to an unexpected drop off in winter demand, while the inability for both oil indices to recover technical momentum suggests a sorely weak labor market across the globe. 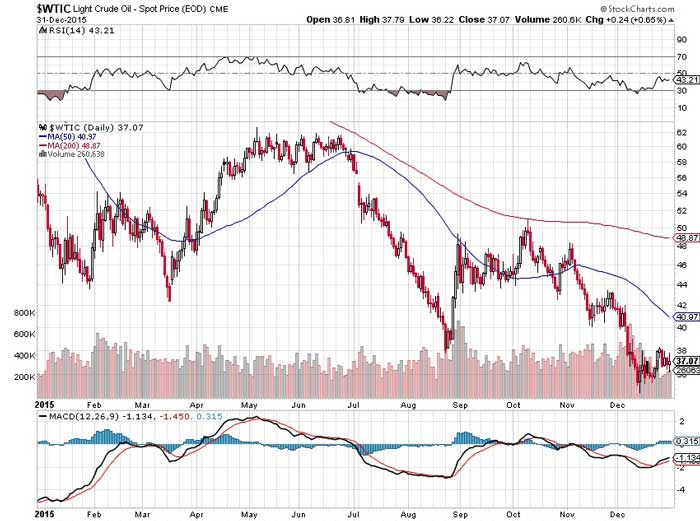 That vulnerability has been exacerbated by declining corporate earnings. During the second and third quarters of 2015, the S&P 500 posted year-over-year earnings declines, a troubling statistic that hasn’t reared its ugly head since 2009. Even more disconcerting is that Wall Street analysts are expecting more troubles for companies heading into the fourth quarter. As retail sentiment was fairly mixed for this year’s holiday shopping season, there’s a very real probability of sustained disappointment.

Looking ahead to 2016, the atmosphere remains cautious. Yes, the permabulls will inevitably rattle off a number of companies to hawk an unsuspecting public, but the practical reality is that top-line sales growth for all industries will be harder to come by. Logically, the focus will then center on earnings growth (net income), but that would involve cutting — resources, investments, people.

At some point, there’s only so much that can be cut before the economy at large enters into a very dangerous deflationary spiral. With the Federal Reserve siphoning off the monetary spigot, however, the trajectory appears predestined.