With geopolitical tensions flaring throughout the world providing the catalyst for severe dysfunction in international finances, the United States is once again blessed with insular protectionism, a condition that has served the lone superpower well throughout multiple generations. As pundits from CNBC and other media outlets have eloquently stated, “we’re the best house on the worst block.”

While other global markets have dealt with rapid fundamental depressurization, particularly Russia, the American economy seemingly enjoys a combination of impossible tailwinds: lower commodity prices (crude oil), a strong dollar, and a growing jobs market. As an added bonus, interest rates are still near all-time lows despite the Federal Reserve threatening to unwind its massive quantitative easing program. But with interest rate trajectory typically carrying an inverse relationship with inflation, how long can the current monetary situation last?

In many ways, the current economic picture in the U.S. is the exact antithesis of Russia. The embattled nation’s shock decision to jump interest rates to 17-percent reflected the greater strategy of restraining the effects of capital flight as everyday Russians scrambled to secure wealth outside their country. Despite these and other extreme measures, including the sale of foreign and possibly precious metal reserves, the Russian ruble has continued to tumble, breaking several dubious records along the way. Ordinarily, raising rates inspires confidence amongst hedgers, or savers, and likewise deflates the confidence of speculators, or buyers.

The reason is fairly straightforward: as rates rise, the risk-reward balance shifts decidedly in favor of the saver, who gains a sizable return on parked money. At the same time, this creates a deflationary environment as business activity decelerates, and the rewards for taking a speculative risk diminishes. However, Russia’s case of high interest rates and record-high inflation (due to the ruble’s devaluation against the dollar) suggests either an artificial shock to normal supply demand dynamics, or the citizenry’s complete lack of trust towards their country’s fiscal management. While this goes beyond the scope of this article, both circumstances are likely ailing the Russian economy.

The U.S. economy, thankfully, is on the other end of the illogical spectrum, with low interest rates yielding low inflation. Indeed, the enormous strength in the dollar and the spectacular implosion of the crude oil market is arguably a symptom of deflation. Business activity is up, according to the Department of Labor, which should mean more dollars chasing fewer goods as workers spend their paychecks on both essentials and discretionary items. Yet prices continue to fall and retailers this year are more competitive than ever, as evidenced by multiple extensions of Black Friday deals.

Such unusual variances from established patterns are unlikely to hold, indicative of a potential correction in the U.S. bond market. Since peaking in the early 1980’s, interest rates have been on a consistent decline, thus making previously issued bonds more attractive with their higher yields. But with new leadership inside the Fed, does this signal a massive trend reversal? Technically, it appears that downside velocity of interest rates have abated somewhat, which suggests that future market action will attempt to stabilize around a defined range. Such a scenario represents the best hope of the economy since volatile fluctuations over a key metric would be undesirable given the precarious “recovery.” 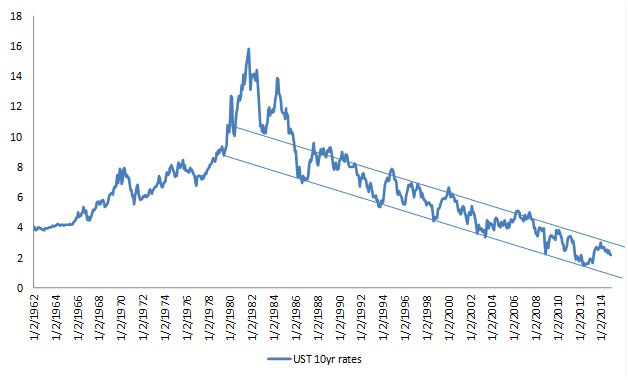 However, the Russian economic crisis represents a major darkhorse that could leverage unpredictability towards international finance. With their rates so high, it could attract foreign speculators, resulting in a net influx of capital despite the majority of Russians committing monetary “white flight.” The driver in this potential scenario is human emotions. At some (price) point, enough reward can justify any risk. Russia’s central bank is literally banking on an arbitrage gift within a closed system.

If Western investors bite, and they very well might do just that, this can lead to a bidding war for any remaining capital. After all, nobody wants their cash to sit there and collect dust. The 17-percent rate may be the sweet spot for speculators to take a chance on Russia. Of course, the gamble on the Russian side is that their economy can hold on long enough for the capital to arrive.