The benchmark S&P 500 index is on a veritable surge, moving up more than 8% since its August 24 bottom — a product of the broad market correction that momentarily panicked investors worldwide. Now, those nail-biting memories seem completely forgotten, with the bulls pushing ahead with a gusto not seen for quite some time. Yet it’s that very hubris against bearish macro-economic fundamentals that may be setting up the blue-chip markets for a very ugly culmination.

China — the darling of Wall Street growth investors and the undisputed king of the emerging markets — has yet to come up with a substantive solution to their economic problems. Consumer sentiment remains weak — as evidenced by poor financial performances of several retailers with leverage in China — and efforts to restore stability in the country’s economic infrastructure, including the increased offerings of public-private partnerships (PPP), has led to mixed results.

The Shanghai Stock Exchange Composite Index (SSEC) — the benchmark for Chinese blue-chip equities — is up 8% for October, a percentage move that most likely would have been even greater were it not for the Golden Week holiday that virtually shutdown the country. On the other hand, the spread between the SSEC’s 50 and 200 day moving averages is more than 10%; problematic, considering the technical “death cross” that flashed in the index in early September.

Closer to home, the dismal numbers for the September jobs report released by the U.S. Department of Labor confirmed that even against lowered expectations for the labor market, the government-produced statistics failed to make the grade. The worst part of the jobs report may be the running joke that the only opportunities available are coming from Wal-mart Stores, Inc. (WMT) and its ilk.

But what about Wal-mart itself? Surely, if any company were to benefit off of desperate people looking for work, it would be they. But the pre-announcement of its financial statement for its upcoming earnings report was an about-face against the populace forecast, with the retailing giant warning of a mass sales reduction and a possible 12% drop in net income. Subsequently, WMT stock’s market capitalization also was cut down by the same amount last week. 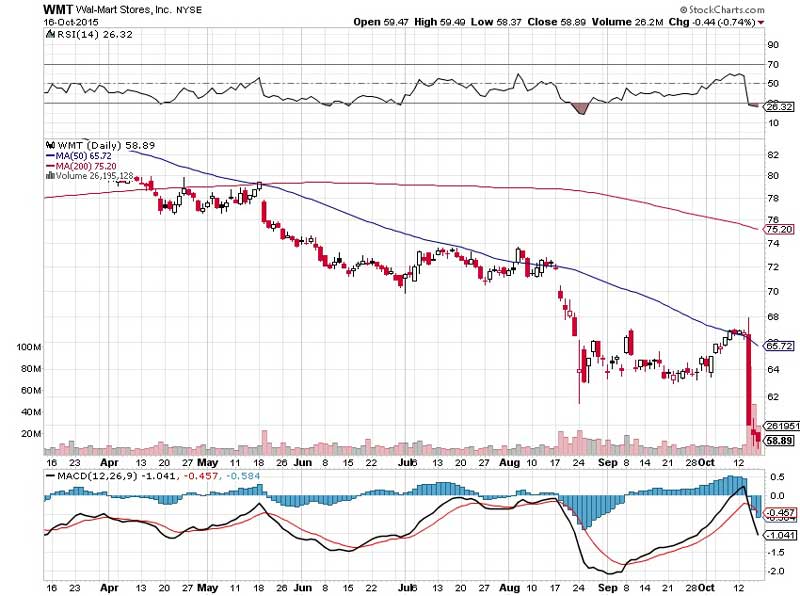 The response by Wal-mart’s executive management team was predictable, which was to explore ways to cut cost, including potential stores to shut down. Some analysts are even speculating that Wal-mart’s subsidiary company, Sam’s Club, will be spun-off as a separate entity in a bid to free up cash flow.

While such drastic measures are still some time away, it does reflect in many ways the desperation the broader U.S. economy faces. Rather than focus on substantive growth and development, our government is always looking to cut corners, raising money through onerous taxation and inflationary policies. This cheap proliferation works when most everyone is duped into participating in the fraud. But when the real fundamentals eventually show up — as they did for Wal-mart — someone always has to pay the bill.

It’s an ongoing drama that is only going to intensify in the coming months ahead.