Perhaps good news may be bad news after all. At a time when global financial markets seldom follow logical pathways, one counterintuitive message may ring true. The U.S. Federal Reserve has been promising — some might pessimistically say threatening — to raise interest rates so long as economic barometers confirm positive momentum and stability. While the Fed isn’t looking solely at one specific metric, it’s fairly obvious that a healthy labor market is priority number one. With last week’s solid jobs report for November, Fed chair Janet Yellen has the green light that she needs.

The only problem, though, is the other nagging indicator — blue-chip equity indices. Wall Street suffered a major dumping last Friday, with the benchmark S&P 500 down nearly -2%, while the Dow Jones Industrial Average came in a close second at -1.8%. The Nasdaq Composite Index poked its head just above parity, but ultimately, that won’t matter much. Investors are feeling jittery ahead of what could very well be a rate hike, and nothing in the markets operate in its own secure vacuum.

The leading cause of the volatility was again oil, with the international benchmark Brent Crude dropping -3.8% for the day. The index is now firmly below the $40 technical and psychological level, whereas the light crude index, West Texas Intermediate, is trading 36 cents above the $35 mark. These are critical breaches that show no evidence of abating. One could easily argue that there is simply no demand for energy right now, which would imply that people are making do with less. In other words, there is no economic growth. 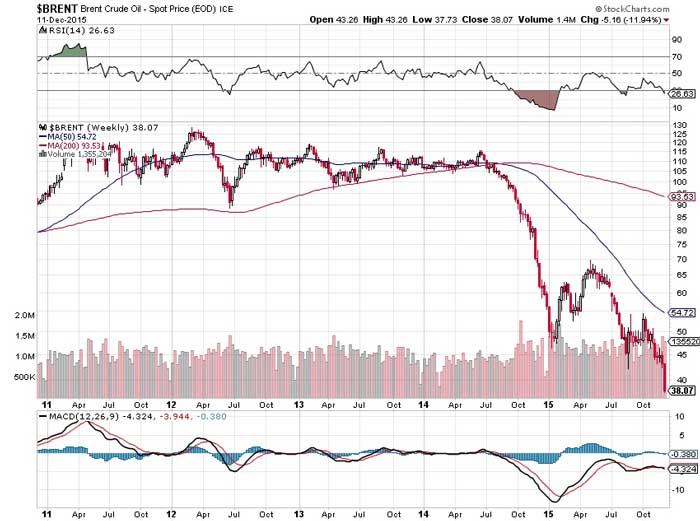 Of course, the counterargument is … so what? Some people made money on certain assets, and lost money on others — that’s the way the market rolls. But in oil’s case, that conventional wisdom doesn’t necessarily apply. Oil represents a significant portion of Americans’ retirement funds — whether they realize it or not. In addition, Wall Street fund managers typically don’t invest all their resources into one asset class. Hedging your bets with a broad portfolio is an absolute must in this modern era of financial insanity.

Thus, oil’s losses are essentially all of our losses. In order to make up for the red ink in the energy sphere, fund managers must take profits off of their winners. This eases the pain inflicted by oil’s volatility, but it also obstructs the bottom line because winning positions must be exited. Repeat this across the board and this is the reason why fundamentally sound companies have witnessed sharp losses on Friday.

We still don’t know if the Fed will raise rates, although industry experts would likely peg it as a high probability. In the end, it simply won’t matter. Economic drivers have already pushed the markets to the breaking point, and now it’s a matter of wait and see.