The financial markets do not look well — and that could signal some rough waters as we steadily head towards the summer season. Despite strong employment numbers on paper, and amid a Federal Reserve that is positioning itself in a more dovish manner, Wall Street has not taken those cues as signs of strength. Instead, the markets appear pensive, unsure of what tomorrow may bring. Indeed, it has been a wild journey over the past month, with the semblance of predictability being an ever-elusive target.

Let’s cut straight to brass tacks. On the chart of the benchmark S&P 500, the bulls failed to advance the rally in blue chips. As I pointed out to premium members of Future Money Trends, the markets were flashing clear signals ahead of a critical juncture. Pass, and the markets have a good chance of moving higher. Fail, and the opposite probability is the risk. We’ve crossed that juncture, and as you can tell, things aren’t looking chipper.

Now, the most obvious technical signal is the 200 day moving average. This long-term indicator has been wavering since late-August of last year — exactly at the moment of the summer panic of 2015. Currently, the price action hangs delicately over the 200 DMA. Traders are watching this development very carefully. If the price action continues to fall, and breaches the long-term average, that could precipitate further selloffs. 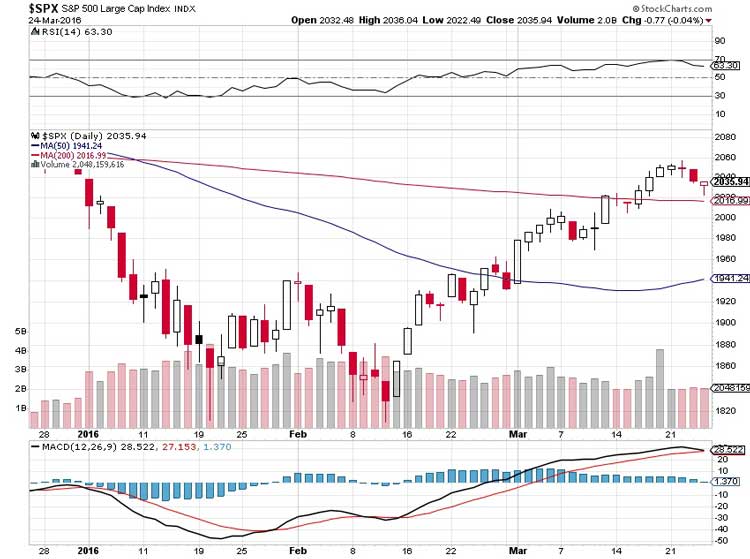 The reason is two-fold. First, and perhaps most significantly, the fund managers that are essentially the gatekeepers to the multi-trillions of retirement dollars that Americans have saved in investment vehicles like a 401K plan need to make money. It sounds obvious, but it’s an often overlooked fact. Fund managers are graded on performance, and are graded at multiple intervals. Should a fund manager know that they are looking at a weak quarter, there’s really nothing to prevent him or her from dumping losers and jumping on to winners.

Well, the losers in this case is starting to shape up to be the S&P 500. We can all agree that it is the international benchmark for financial performance. At the same time, it has barely broke even for the year. In anyone’s book — and especially Wall Street’s — that is a loss. Nobody prances around after a stalemate. If you aren’t winning, you’re dying.

The second reason is that there hasn’t been much commitment by the part of traders and professional money managers to move this present rally further. It has potential, but money isn’t actualized on potential. Wall Street guys are the first to tell you this, and that’s why they’re paying close attention to technical indicators like the aforementioned 200 DMA. The direction of the markets at these important junctures can tell a lot about the sentiment of other traders.

This watch-and-wait mode by the smart money is worrisome for the rest of us. If they feel uneasy, so should we. Unfortunately, the general public is not privy to such technical nuances, and they risk a great comeuppance for their ignorance.