What The Smart Money Is Buying: Gold!

Amidst the sudden backdrop of the Swiss National Bank’s announcement that it will no longer honor the policy to artificially decelerate its national currency, safe haven assets, particularly gold, have been shoved into the limelight. Investors are rightfully concerned with the abrupt shift in the global economic infrastructure, which saw the Swiss franc move up over 30-percent against the dollar and Euro immediately following the alpine nation’s central bank disclosure. In broad terms, this sets the stage for deflation in Switzerland and inflation for the United States and European Union members. Under such conditions, gold has historically performed well, acting as both a financial hedge against economic uncertainty and as a profitable investment vehicle. But with so much ridicule leveled against the precious metals complex by numerous financial experts, can gold be trusted to provide the “equity of security” that it is often marketed as?

One way to answer the above question is to find out what the power brokers on Wall Street are buying. After all, nobody worries or cares about what your next door neighbor is acquiring unless that person happens to be Warren Buffet. Power brokers or the “smart money” make their moves prior to the big waves of sentiment, thus maximizing their capital returns. More often than not, it pays to trade with this privileged class than against them and currently, their recent foray into gold suggests further price increases for the bullion market. 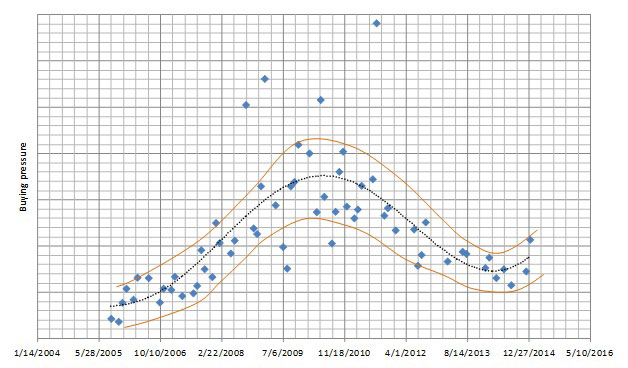 While a complete expository confirmation of the power brokers’ trading behavior is impossible without privileged (and confidential) information, we can still garner a sense of their sentiment using a statistical tool called linear regression, which measures the relationship between a dependent variable and an explanatory or independent variable. Using a monthly chart of the popular gold fund GLD, we will define the dependent variable as buying pressure and the independent variable as time, with the end goal to determine patterns or variances for or against expected behaviors.

From the chart above, we can see that from an overall perspective, individual buying pressure is stacked closely with the polynomial regression (dotted black line) of total buying pressure. Data points that are outside the standard deviation of the polynomial regression (as approximated by the two orange lines) are statistical outliers representing moments of extreme high or low purchases.

There are two important take-away lessons. First, as a general rule of thumb, it is unwise to accumulate large positions in gold when sentiment is abnormally high. This was the case during the run-up to the 2008 financial crisis and was most prominent during the 2011 parabolic peak when the entire metals complex reached all-time or multi-year highs. Second, trading behavior tends to become more dispersed when the price action reaches market tops. In other words, there is a shift from order to disorder as the general investment public gains hold of the trade that was initiated far earlier by the power brokers. This then acts as an early-warning signal to taper accumulation and instead concoct an exit strategy.

Currently, gold’s market sentiment has leveled-off on a rising support line, with individual buying pressure accumulating close to the polynomial regression. This suggests that most of the dumb money have panicked out of their positions, which represents an opportune time for the smart money to build back on a potentially profitable investment. The ultimate lesson then is to filter out the noise generated by the mainstream media, avoid the dumb money theatrics, and instead move early with the power brokers.