Although the mainline corporate drivel is to promote the virtues of personal savings through government endorsed “defined-contribution pension plans” such as the 401(k), the furor regarding these retirement assets is akin to any other financial bubble breathed to life by good intentions and eventually sentenced to perdition. Consider the recent sub-prime mortgage crisis: the battle cry of real estate brokers throughout the nation was that everyone deserved a piece of the American dream.

The prudence that all investments of any nature carry default risk was quickly countered with the idea that “this time is different.” Indeed, it is difficult to recall a period of a preponderance of optimism in spite of logic and economic fundamentals. Yet the merry-go-round is open for another ride, this time in the record breaking equities market, corralling unsuspecting investors for a potentially dangerous situation.

Just why are so many alternative-investment minded individuals leery of the 401K? Is saving money no longer a virtue? The problem with the 401K and the retirement industry in general is a definitional one. Saving money, or “pure asset” accumulation is different from investing. Saving money carries little to no risk outside of the counterparty risk of the saved currency. Investing always carries risk, regardless of whether the invested asset is gold, oil, or bushels of wheat. The prevalent corporate message is that employees can “save” money by deducting portions of their paycheck to a defined-contribution plan. The pre-tax benefit is one of many deceptive incentives designed to lure people into such plans.

But why does an inherently good virtue need manipulatively crafted incentives? The answer is that the concept of “saving money for the future” is really “investing for the future” in disguise. On surface level, there’s nothing wrong with investing today’s money for a greater benefit tomorrow. But the core issue is that those benefits are not guaranteed. To be frank, the promised truism that “slow and steady” wins the race has a higher contextual probability of ending in financial disaster, especially if the invested asset is the stock market. 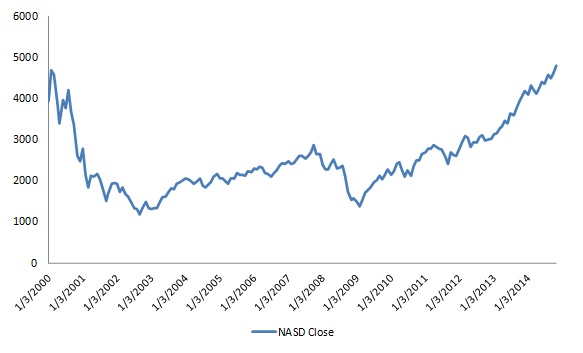 Let’s assume that somebody had committed $10,000 in a fund that perfectly matches the performance of the NASDAQ index back in January of 2000. Based on a month-to-month average, our hypothetical investor would have seen a quick gain on his or her investment, only to watch it plummet during the throes of the internet crash. The ten-grand would hit a low of $2,974 before taking an arduously long recovery. However, by November of 2014, the investment would be worth $12,160, a 22% gain for a nearly decade-and-a-half long investment. In other words, quite pathetic.

The obvious counterargument to the point above is that had an investor not forked over money at the peak of the bubble, then he or she would have realized a tremendous profit today. That is true in hindsight. In reality, a bubble and a crash are not evident until it actually occurs. Further to the point, since the run-up to the internet bubble featured years upon years of upward trajectory, the mathematical probability would have encouraged investing at any price! The concept of the black swan was not on the radar until it materialized.

The other reality is that market crashes, when they occur, do so quickly and viciously. Between January of 2000 and today (November 28, 2014), the base probability of monthly averages states that an investor on any given month can acquire one share of the NASDAQ index and have a 53% chance that his or her investment would realize a profit the following month. Within the context of price movements, there is a 56% chance that an investment would post a gain if the valuation shifted up to plus or minus 5%. However, price movements of up to plus or minus 10% reveal that there is only a 50/50 chance that the market will go the way of the investor. In other words, as the fluctuation of the market increases, there is an increased probability of a market crash. If a violent crash occurs, the chance that a retail investor would be able to protect his money in the eye of the storm is a narcotics-induced fairy tale.

Success in what the government refers to as “retirement savings” is almost entirely dependent upon speculation, a fact that if revealed on a wide-scale would surely result in a panic of its own.