Trump to Devalue the Dollar

Trump’s successfully negotiated many bad and unsustainable debt deals in business, and he’s now getting a head start on dealing with the most indebted nation on Earth.

The U.S. Treasury department, Congress, the White House, and the Federal Reserve are all pushing for a weaker dollar. Policy makers see a weak dollar as fuel for the economy and an inflationary path to dealing with the nation’s debt obligations.

Being long the dollar is perhaps the most crowded and popular trade right now, despite money managers admitting in a survey that it’s more overvalued now than in the last 10 years!

The market has already priced in at least two additional rate hikes in 2017. In fact, the dollar has already rallied big, so as the news comes out and rate hikes actually happen, we expect to see further sell-offs in the currency. 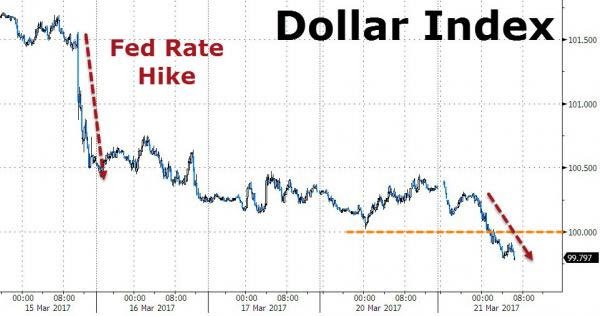 A weaker dollar vs. other currencies and a rising gold price are two trends we see accelerating in 2017.

You wouldn’t know it if you follow the mainstream press, but the U.S. has actually maxed out its credit limit and the Treasury is burning through its cash. If they don’t raise the debt ceiling by June 1st, we are looking at a very ugly situation for the U.S.

Whether it’s tax cuts, Trump’s infrastructure spending plan, or the new healthcare act, the big takeaway for us is that Trump is facing not only a hysterical left, but a fractioned Republican party, made up mostly by establishment politicians who would prefer to see Trump fail on a big league scale.

I’ve never seen a trade so clear in my life.

Mark my words: gold investors, specifically ones who buy the shares, are going to experience a rip-roaring bull market for the next 3 to 5 years!  Now is the time for accumulating positions in a sector that is set up for a massive run here, for cyclical, fundamental, and monetary reasons… all of which are supporting a higher price.

Keep in mind that if you’re buying juniors like we are, then it really does take gold making 52-week highs to see those parabolic moves many of you experienced in 2015 and 2016 with us.