Inflation and War Are on the Horizon

Perhaps the Final Act is About to
Start for the Global Monetary System
Dear Reader,

We’ve all known this was coming, we just didn’t know when.

For the first time in 5 years, the FED’s preferred inflation gauge hit its target. Despite all of the deflationary forces, like lower consumer spending, higher savings rate, and stagnant wages, the FED was able to boost the personal consumption expenditures (PCE) to over 2%. 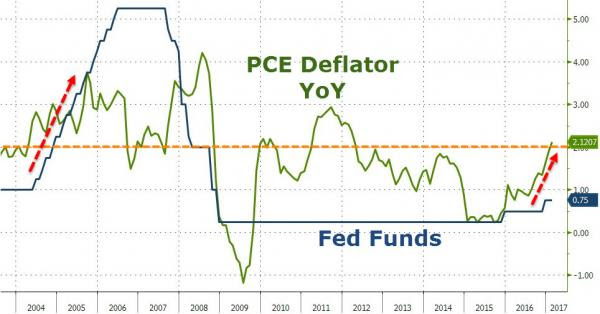 This means another rate hike is coming, and our 52-week high for gold this summer could come as early as May.

With central planners worldwide taking unprecedented actions for the past 10 years, we’ve always speculated on the ultimate exit strategy. No matter who we spoke with, whether it was Doug Casey, Rick Rule, or former CIA advisor Jim Rickards, a new war has always been a reliable bet.

Last month, the new Secretary of State said this about North Korea: “diplomatic efforts of the past 20 years to bring North Korea to a point of de-nuclearization have failed.”

He also said “military action was on the table.”

Friday, the new Secretary of Defense added that “North Korea has got to be stopped!”

A new war in Asia would allow central planners to extend emergency measures for another decade.  It would allow the market to ignore exploding U.S. deficits that are coming, because it could all be blamed on the war efforts and “protecting America.”

Keep in mind that all of this is heating up while President Trump is scheduled to host the Chinese President on April 6th and 7th here in the U.S.  In the 2000s, we had a rising rate environment, exploding personal and public debt, and war.

Major indices rose, gold went up for 12 consecutive years, and it all ended with the 2008 financial crisis.  With negative real yields, one investment I am certain of is hard assets.

We recommend up to 10% of your liquid net worth be in precious metals for financial insurance and peace of mind as the central planners and Western governments once again lead humanity into a very dangerous time in order to keep their Ponzi schemes going.

Editor’s Note: A new Gold Stock Report will be delivered to you soon. We’ve been patiently waiting in 2017 for the gold sector, and we believe we are weeks away from the next big leg up.