Strategic Ownership of Gold is More Important Than Ever!

I own gold not because I think I will make a profit, but for insurance purposes, because I know that everything we are being told about our economy is a lie. And one day, not too far from now, the currency, the pumped-up markets, and the price inflation in assets are all going to implode!

At the end of the day, hard assets are what will trump in these times!

This is why I have positioned myself and my family with the ultimate insurance against central bank stupidity and global monetary experimentation. I also plan to profit, and not just a little bit… I am not looking for a double or triple, as the truth is gains like that really don’t excite me.

It’s why this year, one of our investments related to gold has yielded 7.5x the gain of gold. A $10,000 order of gold at the start of this year is now worth $10,220. It’s not a bad return, and certainly nothing to complain about.

But as many of you reading this letter know, a $10,000 investment into our gold mineral bank suggestion is now worth over $25,000!

This is why I stress to everyone who will listen that if you’re looking to profit from the rise in the gold price, DON’T buy gold. Gold is money, and it’s a great hedge against all the problems that are coming our way, but I assure you, no one owning gold is going to see a massive increase in their net-worth.

It’s why we believe all of our members should have a solid position in one of the best gold portfolios in the world, held by First Mining Finance and headed up by Keith Neumeyer, a legend in the precious metal industry.

With nearly 14 million ounces of gold acquired in the past 18 months, this is one of the fastest growing gold developers in the world.

In fact, no company on earth has achieved what they’ve accomplished. They’ve taken over 8 gold companies since April of 2015. 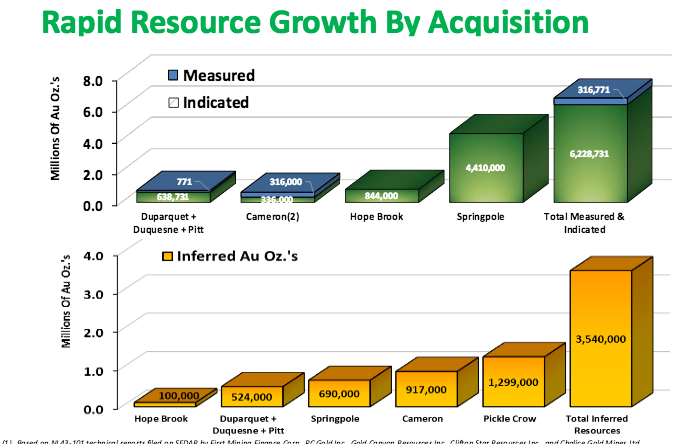 It’s no wonder why public records show Chairman Keith Neumeyer buying millions of shares on the open market since the company started trading.

First Mining Finance (TSXV: FF & US: FFMGF) has become the go-to gold stock for investors looking to own gold assets in a safe jurisdiction (Canada), with gold resources, surrounded by some of the largest mining companies.

This isn’t the first time investors have sought Keith out in order to make a fortune… In the 1990s, he started First Quantum Minerals, turning it into a billion-dollar giant!

In the early 2000s, he founded First Majestic Silver, his second billion-dollar company, and to this day, it is still the go-to stock for silver investors. Now, he’s turned his attention to building the ultimate gold mineral bank – a company with gold resources in the ground, buying up gold for less than $10 per ounce!

Keith and his team have taken advantage of the depressed gold market by launching in 2015 and going on an unprecedented acquisition spree. Just 1 asset, in 2012, was valued close to what the entire company is today, and First Mining Finance now has 25 projects. This includes one of the largest, undeveloped gold deposits on earth!

I don’t think anyone has seen a business plan executed so well. When First Mining Finance launched just over a year ago, they had zero ounces of gold… Keith Neumeyer laid out clear objectives: acquire gold assets from distressed sellers and build a mineral bank, unlocking incredible value to shareholders as the gold market turns higher, with joint ventures, royalties, and even spinouts of some of the projects.

In August, First Mining Finance announced a deal with Silver One Resources, selling 3 exploration projects in Mexico. Mr. Neumeyer and his team purchased Silver One shares instead of cash, in order to maximize the return on these assets for their own shareholders… Within weeks and by the time the sale closed, this sophisticated group running First Mining Finance saw the dollar value of their Silver One share position rise by over 300%!

It’s just like when Keith Neumeyer took his other company, First Majestic Silver, and held back the sale of physical silver when the price was down, waiting for a move up in order to get the best price.

If you’re looking for a great gold stock, First Mining Finance is the perfect marriage between great assets and an exceptional management team that is made up of very serious mining executives and geologists.

Other companies today are paying upwards of $50 per ounce of gold in the ground. First Mining Finance has always paid less than $10, and has even purchased gold resources for as low as $3.80 per once!

As gold rises, it will be the shareholders of First Mining Finance and the investors who partner with people like Keith Neumeyer who will be rewarded.

Our Recommendation: Consider buying shares of First Mining Finance up to CAD$1.27 & USD$1.00. There has probably never been a better time to enter the metals and mining shares.

After having a horrible bear market since 2011, gold is now in a bull market, with unbelievable fundamentals.

And to add to the demand for gold, we have China, the U.S., and Europe teetering on massive debt crises.

Most importantly, and a story NO one is covering, is that 1.6 billion Muslims currently can’t invest in gold, but on January 1st,  laws are changing for Islamic financial institutions that will open up this market, creating an enormous new demand coming from Middle Eastern oil money.

What’s about to happen to the gold price will be historic.

With negative interest rates, a ballooning U.S. deficit, and nations now fighting over natural resources, it is more important than ever to have exposure to gold.

This is why we are recommending very specific gold companies, like First Mining Finance.

Daniel Ameduri
President, FutureMoneyTrends.comEditor’s Note: I own shares and am long First Mining Finance. I personally only own the stocks covered in the Future Money Trends letter.