At first glance of data provided by ADP, one of the world’s premiere human resource management companies, the American labor market has been trending in a sharply favorable trajectory. From April of 2001 to February of this year, the month-over-month percentage change in the labor market as a basis of aggregate jobs added (or lost) has consistently increased. In other words, as the number of employment opportunities grow, so too does the momentum, raising the probability that good news will beget more good news.

Key to this optimistic trend is concentration of performance. For months that featured a percentage change in aggregate employment between 0.15 to 0.20-percent against the prior month, they are heavily concentrated when the economy nominally adds between 200,000 to 250,000 jobs. Over the past year, the labor market grew an average of 245,000 jobs, indicating that the recent surge in hiring is neither anomalous nor unexpected. 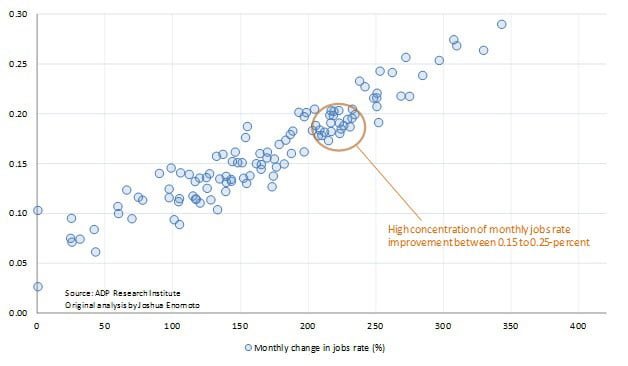 Nature of Our Macroeconomic Circumstance

Despite an unemployment rate that has dropped to 5.5-percent, according to the Bureau of Labor Statistics, the qualitative context of an economy on the tracks to recovery has yet to materialize with the same fanfare. In May of 2014, The New York Times criticized the alleged improvement in employment figures, noting that people who give up looking for work represent a distortion in government provided statistics (Irwin, Neil. “The Jobs Report Isn’t as Good as It Looks“. The New York Times. May 2, 2014. Web.). Neil Irwin of the Times further asserted that hours worked and wages earned remained stagnant.

But what else can explain the bullish progression? It turns out that commonly trumpeted labor benchmarks hide an unbalanced condition. Between the end of 2010 and February of 2014, the ratio between “production jobs” and “service jobs” generally increased as the total number of jobs expanded, up to a maximum total of 229,000. The correlation coefficient between the two variables is a respectably significant 0.51. However, on months where the number of jobs added was 231,000 or more, the correlation dropped to a statistically insignificant 0.09. 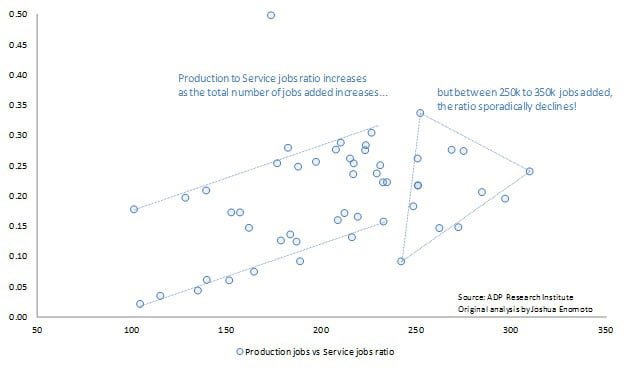 Such findings demonstrate that the bulk of the alleged labor market recovery is distributed from “service jobs,” a broad category that includes “temporary help services.” As aggregate opportunities grow on paper, industrial or manufacturing jobs cannot keep pace with seasonal or part-time jobs, thus distorting the true nature of our macroeconomic circumstance.

Of course, no methodology (quantitative or otherwise) is foolproof.The recovery and its associated correlation with major equity indices could keep chugging along, baffling experts and pundits alike. The information provided in this article is not meant to alarm anyone into a panicked position; rather, it is to discuss in a frank manner the reality of our situation and that unbridled optimism is contextually unjustified.